Just as it was getting dark one night, there was a single knock on the front door. A parcel lay on the porch. The person who put it there, about to get back in his van, turned and smiled in my direction.  Or at least I think he did, because he was wearing a mask.

In the old days, before the coronavirus came amongst us, a masked man in the neighbourhood  would have been a suspicious character, bent on breaking into someone’s property or robbing a local bank. But now, in the summer of 2020, the covered face is common in the western world, far beyond criminal circles.

If I enter the unsafe space that was once simply a shop, I must cover my nose and mouth, as customers from Austria to Zambia have long had to do. Masks must be worn in all public places in most countries now; in some, the moment you step outside the home.

But covering the face is not the custom here. What looks normal in South Korea, Tokyo or Singapore, looks a bit odd in Middle England. A free and open society has a visible, sometimes questioning face. Anything over it blocks a process so instinctive we’re hardly aware of it: reading the signs of good or ill will or indifference.  I look at you and if you look back at me, we’re fellow citizens on equal terms.

All the body coverings we call clothes carry messages, but the mask is as much object as garment.  Like all objects, it has a long, long history – and many faces of its own. 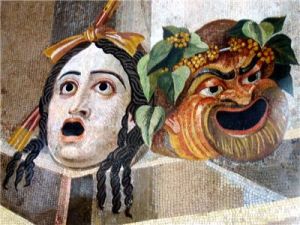 On an ancient Greek stage, the actor’s true identity was hidden behind a persona – a false face made of stiffened cloth, wood or leather, with an exaggerated tragic or comic expression that the audience could read at a distance. A young man could play an old one, or a woman.

Or, at a ball in 16th century Venice, he could hold an elaborate disguise on a stick, embellished with gold, silver, jewels and feathers and speak freely of city scandal or make a declaration of mad, forbidden love.

Such showpieces have a very dismal descendant – and it’s hanging limply on a hook by the front door, there to remind me to put it in the handbag with other essentials like house-keys, tissues, mobile… It looks like a folded cleaning cloth with elasticated ear-loops. A flimsy, functional affair, made in China.

Before we entered the Age of Coronavirus, wild horses on bended knees wouldn’t have got me to wear such a thing, because an elderly person is invisible enough already and I dislike anything over my face, even a duvet.  An early memory rises from the depths…

I can see it now, 70 years later, though not the hand that held it or the other people who must have been there. I was lying on a strange bed and something dark, round and rubbery with a tube coming out of it was coming down towards my face and I was afraid. Then everything went black. The anaesthetic appliance was to knock me out, so they could take out my tonsils.

I may not like it, but I’ve got used to wearing a mask now. The disposable one by the door has a re-usable alternative, made of organic linen, in a botanical print.  A friend smiles an unmeant smile when I tell her all this; for her, anything over the mouth is an obstacle. Profoundly deaf since childhood, she depends on lip-reading to converse with the world – and the standard mask has no window. We both dress our faces with make-up in the morning and she has her own range of face furniture – designer sunglasses – but they’re accessories.

The mask on the hook is much more than a new bit of kit. It’s meant to be a shield against the deadly droplets of a disease still mysterious to us. The pleasant-looking passer by or fellow shopper could be a carrier, one of those super-spreaders with no symptoms.  The scientists don’t seem too sure how protective this piece of personal equipment actually is, though, and there’s something primitive about the practice – as if a face-guard could ward off the evil spirits haunting the air around us.

The mask has long been a sign that something’s wrong – that someone’s in danger or dead – or about to be. A child – an older cousin of mine, who started school in the war, remembers a gas mask slung around her neck.

An investigator wears one at the scene of the crime, to avoid contaminating the evidence. An executioner in a balaclava stands on the scaffold or in the desert.  And once upon another time of trial, the plague doctor wore a hood with a bird-like beak filled with herbs and spices, to sweeten and purify the air…

To stay in the shadows a little longer – where the face itself is enclosed, the mask becomes a cage. Instruments of restraint and punishment, made of metal, collect in the halls of fiction and fact. Here lie the unidentified prisoner of 17th century France, the Man in the Iron Mask and the Scold’s Bridle, which gagged a woman’s tongue.  And the muzzle made for a cannibal: Hannibal Lector  – a ‘character mask’, very popular, available on Amazon.

Today’s single-use mask – cheap and mass-produced – has only one horror story to tell so far, a sadly familiar one. Thrown away on a beach, it’s taken by the tide. Typically made of micro-plastic, it will last for years, unless it kills an unsuspecting fish, who mistakes it for food.

But while it sits over the human nose and face, the same mask has a Higher Purpose, to ‘slow the spread’…. and even politicians not generally known for their virtue cover up now, to set a Good Example and get us back into the shops or the office or onto the bus or the train. To an ex-priest I know, wearing a mask is Love Thy Neighbour, in unexpected form. As I don’t even like my neighbours, that seems a bit extreme….

The new social nudge, however, has now hardened into a Rule. In more and more busy places, masks must be worn.  Or a scarf or bandanna, to offer the illusion of choice.  It’s rather restful, this being told exactly what to do.

The campaigner for Keep Britain Free won’t agree.  The Rule’s yet another Abomination, an attack on personal liberty, but the mask is the average activist’s friend – so handy to hide behind and confuse the police.

It will make some feel more secure, others just the opposite.  A troubled or lonely soul may see the mask as another degree of separation from other people; the woman wearing the niqab will look less different, but may not feel it.  The old will look younger, so many wrinkles lost to sight.  It’s bound to offend against someone’s Human Rights – perhaps the man with a bushy beard struggling to contain it….

It’s on its own journey, this mask.  In the current wondrously perverse order of things, what was deemed useless in the spring, when the virus was raging, is indispensable in the summer, when it’s in retreat.  So now it’s everywhere – and multiplying.

And dividing the facial space, it makes one half a blank – simplifying the whole and diffusing our identity.  What has always drawn more attention to itself than to the wearer, is being absorbed into the culture.  A focus becoming background.  A new look for a new reality.

We could all be actors, looking eerily alike, on a stage with no exit, slightly surprised to be still alive – in an epic, tragic drama still writing itself.  When the curtain finally falls on corona, the mask will have played its part.

Then the old national normal will re-assert itself and we’ll revert to type.  Our faces will be free again, as the Queen would say.

In the meantime, we’re seeing ourselves rather – differently.  We have to live with the mask, but we don’t have to embrace it. All we have to do is put it on and take it off with clean hands – and not mess about with it, like that woman in Kentucky, who cut a whole in the front, to ‘make it easier to breathe’….

After all, it’s not a helmet or a full veil, a total eclipse of the face; we can still smile with our eyes.  What lies beneath, at home in the heart, has no disguise. We’ll filter what we really feel with words, as usual – but there’ll always be those we’d be quite happy never to see again and others we’ll always love, no matter what – mask or no mask.

Already a sign of the times, the mask is fast becoming an Icon. It’s only a surface, less than skin-deep, a signal shown in the darkness, but here and now is where it fits – and gives a whole new shape to our civility.

5 thoughts on “The Mask”