The long cardboard box is carried out of the van with care, like a coffin – but the sticker says, Keep Upright – and the item inside should be alive and growing. Cut through the tape, then break open the box. The plant revealed stands in a plastic pot. It’s not the largest aspidistra in the world, but it looks tough enough and the leaves are green and glossy.  Put it on the kitchen window sill next to the money tree and the ginseng from Aldi, tears not very far away.  The label from ShrubSeekers says, ‘easy-care’, but that’s what they all say…. 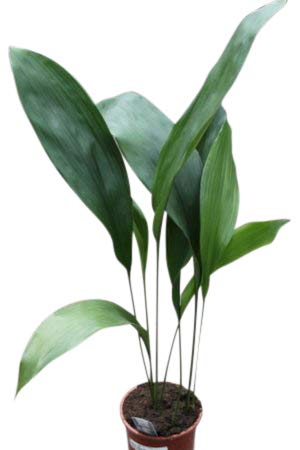 I didn’t mean to adopt him. I was shopping in Chelsea when I found myself in a garden centre where I saw this plant, half-hidden behind a hanging basket. The man in charge of all the shrubs and tubs was also partly obscured behind a high counter and a pyramid of seed packets and looked like a gnome in plain clothes.

I ask him about the plant. Any others around?   There’s no call for them these days, he says.

The aspidistra is not only unfashionable, it’s also out of sorts. There’s a large pale patch on one of  its spear-shaped leaves, bending it at an unnatural angle. Other leaves are as dry as paper.  It’s also £18. Return to the counter and point out the defects.   The gnome looks indignant. They thrive on neglect, he says. You can have it for £12.

The paths are bordered by hundreds of more presentable plants – but the flowering varieties look too fleeting, the ferns too flimsy.  The palms, all elegance, should grace a grand hotel, not a flat in a council block. A cactus called Crown of Thorns has a certain spiky something, but ‘its sap is poisonous’.  A Mother-in-Law’s Tongue has sharp, pointed foliage and no stem to speak of.  ‘Popular trailers’ like Wandering Jew and Mother of Thousands are all over the place. The p.c. Plant Police haven’t reached here yet.  I want something quiet and tidy.  A slow developer, like me.

Go back to the aspidistra for a closer look. How long it’s been there is anyone’s guess. The poor leaf with the patch brushes my skin. At the base is a new, lone leaf, as if pushing its luck…

And so it is I take the aspidistra home on the tube. Damaged or not, it takes up a seat to itself.  A fellow passenger asks, What is it?  Another, who’s actually a dog, edges hopefully towards the stem….On the escalator, people smile at me in passing.  A plant on the move can have this effect, like flowers on a hat or a baby in a buggy.

The hall at home is too small for the aspidistra, so put it in a corner of the front room,  away from the Nintendo games and television. Then I wipe its leaves gently, along the parallel lines. It’s come a long way, from mountains and islands of the far East….

My fingers are not green; other plants in other flats bloomed for a bit, then keeled over  – so dig out a book called 1001 Hints for Houseplants. Mine won’t like Baby Bio, too much water or the sound of jazz…

My sons come home. What is it?  They would rather have a dog, but pets aren’t allowed. They decide the aspidistra should be called something beginning with A.  One wants Allah, the other Asta la Vista.  I fancy Ambrose, but Ambrose, they say, is ‘rubbish’.

The new arrival alters the atmosphere is mysterious ways.  We eat less sugar and lose interest in Coronation Street. The boys do the washing up without being asked.  And Algernon himself evolves.  The patch is permanent, but other leaves take on a green shine. He doesn’t seem to mind the draughts or the banging of doors and one day I notice the brave new leaf at the base is longer, stronger…and there are more on the way.  This plant could outlive us all. An aspidistra is for ever!

Forever lasted till 2006.  The year a man I still loved died on a bus, his body found at the end of the line –  only weeks before the operation that might have saved him. The year the flat was put on the market and I prepared to leave London for the north, to join my new partner.

An aspidistra, the ‘cast-iron’ plant, the pride of Victorian parlours, can live for a century; is meant to be hard to kill. But Algernon began to withdraw into himself. Maybe he missed the boys – now students –  maybe I overdid the neglect. His leaves began to fail, then fall – feeding my gift for guilt.   I buried him under a tree in Bloomsbury.

The new plant has a thoroughly modern air, but it also bears an ancient name that means both ‘shield’ and ‘star’. It deserves a better class of pot, befitting a member of the lily family, but not yet….

A friend, who’s lived in the same village all her life, says’ it won’t like having its roots disturbed.’  She grows the kind of roses and vegetables that win prizes, so knows a thing or two about plants –   was probably one in another life.

The aspidistra settles on the sill as if it owns the place. The ginseng grows more exotic, the money tree more abundant.  I drink more herbal tea and feel more at home in the house.

‘Just keep it moist’, she says…’ Give it the odd encouraging word and it’ll be fine.’  But it doesn’t take long to know that the aspidistra is not an It.  This one too is definitely a Him. Something about the disposition of the leaves…

One thought on “Algernon”