The plant was summer in a pot.  It wouldn’t fit into the shopping bag, so I carried it home in my arms.  A sunflower.  The golden heads had started to droop, as if too heavy for their stems, but soon perked up a bit with a long cool drink.  The newest plant on the patio, but still demanding the most attention, because that’s what yellow does… 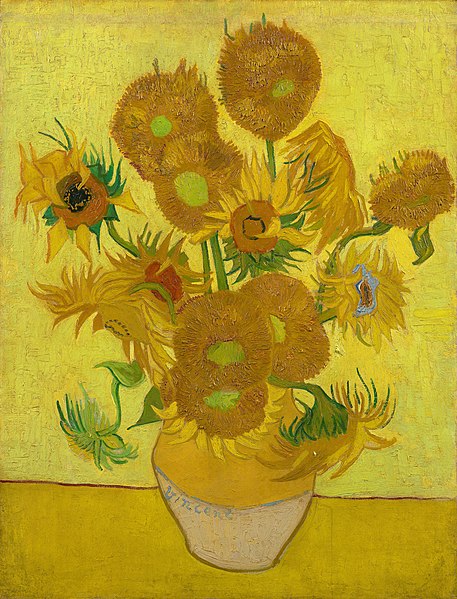 If I were a colour, it would be a low-key tonal type. Nothing too clear or intense. The kind of preference that’s part of a person, like the pull towards certain words, shapes or surfaces.  My younger, floatier self lived in grounding shades of brown and the firmer one still wears them, but this year’s love affair with lilac’s in full swing and has several gay rivals in the wardrobe.  Secret weapons against the embrace of a gathering cloud: the beige haze of old age.  An obscurity where – unless your name is Windsor, Trump or Fonda – your ideas, presence and very future seem to count rather less than before.

Amsterdam, Holland. Autumn, 1973.  The year I left my first marriage, moved from Brighton back to London and took a trip to the country my father’s family came from, centuries before. The Van Gogh Museum had opened only a few months before and you could visit in the evenings, a novelty then.  So I dressed up, as if for a date, and wandered around the new galleries alight with almond blossom, irises and sunflowers. Some of the blooms looked fragile, but also wildly alive and they warmed my troubled heart.

There was a silly song once – about an ‘electric banana’ and a boy ‘mad about Saffron – Mellow Yellow – but it’s a colour with important things to say.  The most visible from a distance, with the highest of contrasts against the blue of the sky, the green of nature or the neutral shades of the city, it’s the favourite for flags at sea and safety jackets….but this stand-out quality is also its dark side.  It’s the fly trapped in amber, the mark of the heretic or the traitor. The 6-pointed star that in September 1941 Heydrich decreed must be worn by Jews in the annexed territories.  The colour of rapeseed, jaundice – and madness.

Provence, France.  Summer,1888.  Alone with his swirling thoughts, Vincent mixes his yellows. And there they still are, lighting up the terrace of a cafe under a starry starry sky or fields of corn or the woven seat of a chair. He writes to his brother about the warmth and ‘pale sulphur’ of the south. ‘How beautiful yellow is…there is no blue without it’.  And about seeing things too clearly, with ‘a terrible lucidity’.

A small friend of mine – another radiant being – has his own vision. Yellow is his ‘happy’, holiday colour, of sandy beaches and the smiley-face tee-shirt he wears with his new sunglasses. ‘To protect my eyes,’ he says, proud to share what he knows. For my 7 year-old’s ‘happy,’  I’ll take ‘hopeful’.

The effect that colour can have on the spirit is a cliche – and some do seem to lighten the inner kinds of darkness…to absorb anxiety, deflect regret.  Yellow is one of them – but in and around the human form, a little mindful management applies. Not to be worn top to toe, at least not in public.  Unless for charity.  No visual screams; no quantities of eggs, lemons, canaries or dandelions.  Instead, find its softer self – like daffodil, buttermilk, maybe a muted mustard. Or custard – not the neon variety, but creme anglaise…then balance it with its lovely opposite on the wheel: violet.

A shade for all seasons –  but if there were ever a perfect time to play with yellow and feel its power, it wouldn’t be in summer, when the sun’s so high and strong in the sky, but in autumn, with its game of golden leaves…or when the light is lower still – in winter.

That’s when I’ll get the rooms downstairs re-decorated, with a nice calm brush…..Not many people know this, but nothing too sad can happen in a small warm part of the world painted primrose.