There’s a headstone in Greece with my name on it.  The stone stands on a hill – one of thousands – in a war cemetery overlooking the sea. Some of the men buried in this place are unidentified, but not the one who died of wounds received in action in 1944. The inscription is simple: this man is ‘mourned by his wife and daughter, who loved him so’. Thirty years later, the daughter interrupts her summer holiday to visit the grave, but lays no flowers there.

Some children of the Fallen are more fortunate than others.  At least I know who and where my father was; he wasn’t missing or lost at sea or in mud – an unknown warrior. He didn’t rot in a cell or a camp; his killer didn’t hate or despise him and his death was recorded for all time. 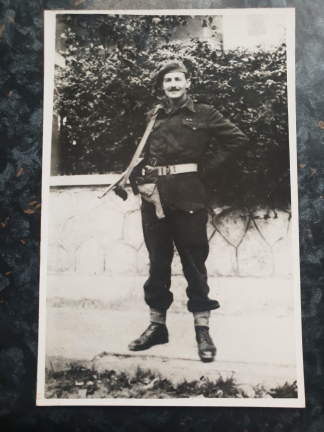 A favourite fantasy re-forms.  At 110, he’s still tall with only a slight stoop and the green eyes are still bright. One of the last surviving soldiers of the second world war, he’s interviewed on television, surrounded by his devoted family.  His daughter never gave his medals away to a young friend mad about all things military – a Terrible Mistake regretted ever since. When the old man is asked if he fears what lies ahead, he says ‘no’ because his ‘fate is in the hands of God,’ leaving his ‘mind free’.  The words written home not long before his story stopped, at 35.

Like millions of war babies, I don’t remember him.  My mother showed me the Post Office telegram in a little brown envelope that broke her heart and faith for good. ‘We deeply regret to inform you…’  She talked a lot about him – still keeping him close – but it was in one infant ear and out the other. I liked the sound of ‘Daddy’, but all that mattered then was what or who was actually there.

An empty space – an early Absence – can shape a whole life.  The first man a child should meet doesn’t appear.  The train doesn’t arrive.  The teenage self grew angry with the man in the hill. He should have come back to make us a normal family, with a brother or sister or two and a stable home.  I was unkind to the poor parent still around and flirted with other girls’ fathers.  I’d been abandoned!  He said he loved us in his letters, but loved his band of brothers more….

I nursed the Tragic Heroine role by reading lots of stories and features about fathers, especially the bad ones best done without. Like the child-killer kings like Herod and Ivan the Terrible – authority figures gone mad – and the worst of them all, the Titan God Chronos, who had a habit of eating his own offspring.  As for modern men, they could be lost to their children in so many ways, through drink or divorce or overwork….Which left all the others – the ordinary unchronicled fathers who stay the course and do their best most of the time, given the chance. The ones more important than they’ll ever know.

Some days mine wasn’t dead at all.  I’d scan the newsreels of soldiers returning when the ‘show’ was finally over and see his face in the crowd. In another scenario, he’d just sailed away and settled on an island somewhere to write books about espionage. Once a Battalion Intelligence Officer in Italy, he knew a thing or two about secrets and lies…and I knew he liked to write, because on one official form his ‘hobbies’ were listed as ‘writing poems and stories.’

It’s his letters, though, that bring him back to life –  still kept in a leather briefcase with his cap and badge, sketches and a tiny New Testament.  A case that’s travelled abroad and back, from flat to flat in London, up North, down South again. One to his uncle, dated 1937, describes the Gold Coast, where he’s on business – buying, selling and shipping railway stock or the yield of a mine.  In 1941, he’s in Kenya and Abyssinia and writing openly about ambushes, mutilations and VD among the men.  He’s often unwell – malaria mainly, but in Egypt he contracts ‘ a form of enteritis popular out here.’  A typically dry, glancing comment. But it’s after 1943, when Derrick marries Mary, that the words really start to pile up.  Thousands of them on thin blue paper, page after page of passion, ‘passed by the censor.’

March, 1944.  He’s still young and his excitement sings out. ‘I’m in Italy!’  One of many armed men blessed by the Pope, he loves Rome and wants to take her there one day – so glad to be out of Africa and back in Europe, nearer home and his newborn child. He’s been on active service longer than most; his leave is already overdue. He ‘won’t live again’ till they’re together, but also knows he ‘must go on till the end.’  When she mentions an American, a single note of reproach. ‘Wait for me’.

There’s a certain glamour about a father who never grows old or difficult. His image is fixed in a photograph. There he is – seated on a camel in front of the pyramids, then standing intact on an Athenian pavement, the hands that never touched mine hidden behind his back. His elder sister once said ‘he could light up a room.’

The Regimental History records some of his exploits, like commanding an anti-tank platoon in France and an incident at Monte Casino, where he recites ‘the whole funeral service from memory, in calm, strong tones’  over comrades in temporary graves. His younger brother has been killed – fighting in the desert, on his first day of battle, at 23.

The darkness within comes closer to the surface. He knows he’s no angel; his ‘caustic tongue’ makes him ‘unpopular in high places’. His cartoons confirm an irreverent spirit: scenes of mayhem in the mess or in the field where the top brass are issuing orders, then counter-orders…It clearly hurts than ‘so many’ are promoted over him, when he’s ‘miles senior.’  His captaincy comes late, almost too late.  The last love letter written on the 27th December is impossible to read in places; he crams in more and more words in even tinier writing. There are no margins.

December 28th, 1944.  Greece has been liberated but civil war has broken out between rival groups, one a communist band called ELAS.  The British Army must restore order in Athens. The new Captain is engaged in clearing out the combatants, street by street. Some distance away, a solitary sniper climbs on to a roof, readies his rifle and takes aim at a random target. In a bedroom in London, the windows blacked-out, Mary wakes suddenly in the night. One of his men later told me, his voice still breaking  half a century later, that ELAS were ‘lousy shots, but not that time.’

It can take an age to accept and absorb an Absence so it becomes part of you, for the yearning – an eternal flame- to slowly die down. In the Romantic Years – my 20s and 30s, I was still searching for a flesh and blood figure – but a tall man with green eyes is hard to find. Someone to watch over me. For some, only God can fill such a space; for others, it stays empty, as perhaps it should.

Chichester, December, 2018.  Some of the family story is shared by my cousin – and it’s her research that leads me to a curiosity shop in Sussex, England, full of coins and clocks, antiques and armoury. The very old man behind the counter is expecting me. I’ve come to redeem a Mistake. He tips out the contents of a brown paper bag and lays them out in a row.

Five pieces of bronze and nickel: war medals with ribbons and a bar, to replace the ones given away a long time ago. ‘They have to be hung in the correct order,’ he says a bit sternly, then comes round the counter and shows me how it should be done. We talk for a while, not long. He doesn’t remember who brought the medals into the shop, so I’ll never know who they belonged to.  Pay for them in cash, then put them deep in my handbag. They feel more like a gift.  It’s time to get the first of three trains home, but pause, not quite ready to leave.  Then I shake the man’s  hand – warm to the touch – and say goodbye.

One thought on “The Father”